So a funny thing happened on the way home from work the other day.  It had been raining off and on for a few days, but by the time I was leaving the office the cloud cover had started to break.  Rain was still drizzling down, but there was just enough light shining to create a very visible rainbow directly in front of me for a good chunk of my drive home.  Since it had been a long time since I’d seen one that strong, I took advantage of one of my several multi-minute red lights to snap a picture of it.

Now, I’m a bit of a science nerd.  Not so much with the softer sciences like biology or even chemistry; I did okay with my studies in those, but they never really clicked for me.  But I take a special little glee in my knowledge of physics.  Physics means that I can look at stuff happening around me every day and understand, at least in broad terms, why it’s happening the way it is and what makes it so amazing.  So when I see something like this, I don’t think, “Ooh, pretty!”  Well, okay, maybe I do a little.  It is, however, quickly followed by a far more nerdy, “Yay, optical refraction! Light is awesome!”

It was brighter than this at the time, I swear

Light really is awesome, too.  For those who have no idea what I just said, refraction is one of light’s many neat tricks.  Basically, light bends.  Crazy, I know.  Lots of people, including myself at a young age, just assume that light travels in a straight line.  It’s an easy assumption to make, since most of the time that’s exactly what it does, at least to the naked eye.  But that’s only as long as the light doesn’t hit anything transparent.  As soon as it does, unless the light hits the surface of whatever it is absolutely straight-on, it’s going to refract.  How much it refracts depends on the material the light’s entering.  Ever wonder why part of your arm looks detached when you dunk it under water?  That’s because the light reflecting off your arm is bending when it leaves the water and comes back into open air.  It gets crazier, though.  Different colors of light don’t bend to the same degree.  Of the visible light spectrum, red bends the least and violet the most with all of the other visible colors smoothly between.  This is how you end up with stuff like rainbows and sunsets and Pink Floyd album covers.

The part about my studies of optics and related fields that intrigued me most was just how much we still don’t know about light.  That may seem strange to say in the modern age, I know.  I mean, we’ve split the atom, put a man on the moon, and created virtual personas that can almost fool a person into thinking they’re human.  How can there be anything we still don’t know about something as common as light?  Ask yourself something, though: what exactly is light?  That’s a question that’s proven surprisingly difficult to unravel for even some very smart minds throughout the centuries. 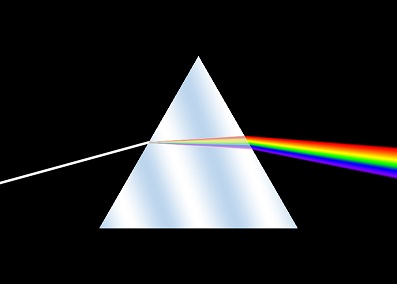 Some people, including Isaac Newton, the guy who literally wrote the book on optics, thought it was a particle.  Others thought it was a wave.  Both theories had problems when they were first proposed.  Particle theory explained reflection neatly and accounted for the way light seems to travel in straight lines instead of bending around obstacles like waves do.  It also meant that you didn’t have to worry about the medium through which it was traveling, like you would for a wave; every other type of wave has a medium, but light didn’t seem to.  But particles made it difficult to explain things like refraction.

Wave theory came into vogue later, after a guy named named Thomas Young did a now-famous experiment called the double-slit diffraction experiment.  Short version: he passed a single beam of light through two close, narrow slits and saw that they came out the other side in an alternating pattern of dark and light bands.  That showed that light could be interfered with like a wave, boosting or cancelling out depending on how the waves line up.  But what about the medium problem, you ask?  Another physicist named James Maxwell proposed an answer: that light was actually a combination of both electrical and magnetic waves, linked together in such a way that they each serve as the other’s medium.  The whole thing’s self-propagating, so it can travel here from all the way through space! 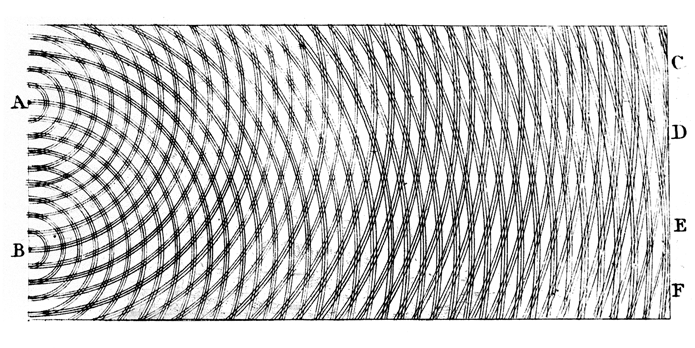 The double slit experiment: If that looks like a pair of speakers to you, it's because they'll act the same way.

And then, because the whole thing wasn’t crazy enough, Einstein comes along and turns it all on its head.  See, scientists had found this thing called the photoelectric effect, where certain frequencies of light could cause a metal plate to throw off electrons, but in a way that couldn’t be explained by wave theory.  Einstein was the one to crack the puzzle, and in doing so resurrected the centuries-old particle theory of light.  That left things in a bit of a pickle.  If light definitely behaves like a wave, but it also definitely behaves like a particle, then just what in the sam hell is it?  As wacky as it is, as far as anyone can tell, it’s both.  Yes, both.

So yeah, light.  Weird, wild, and utterly amazing when you look at it closely enough.  Plus, we’re still learning more about it!  Quantum electrodynamics, baby!  Don’t worry, I won’t try to explain anything about it; in truth, I barely understand it myself.  But that’s okay, I don’t have to.  For now, I’m perfectly content to know that even if leprechauns don’t exist, rainbows are still made from stuff we don’t fully comprehend.  It may not be magic, but it’s close enough to make me smile.

This entry was posted in Science!. Bookmark the permalink.